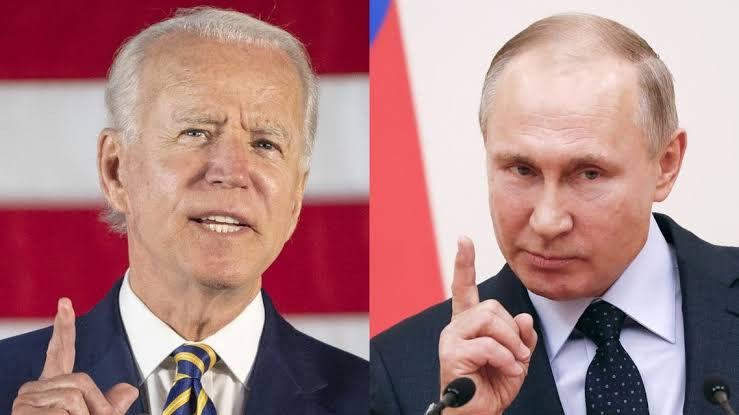 US President, Joe Biden has accused Russian leader Vladimir Putin of commiting genocide in Ukraine.
According to Biden, Russia’s war in Ukraine amounted to genocide,” and Putin was trying to “wipe out the idea of even being a Ukrainian.”
“Yes, I called it genocide,” he told reporters in Iowa shortly before boarding Air Force One to return to Washington. “It’s become clearer and clearer that Putin is just trying to wipe out the idea of even being a Ukrainian.”
Ukraine’s President Volodymyr Zelensky hailed Biden’s comments and called for more support.
“True words of a true leader @POTUS,” he tweeted. “Calling things by their names is essential to stand up to evil.”
At an earlier event in Menlo, Iowa, on Tuesday, April 12, addressing increasing energy prices resulting from the war, Biden implied that he thought Putin was carrying out genocide against Ukraine, but offered no details.
“Your family budget, your ability to fill up your tank — none of it should hinge on whether a dictator declares war and commits genocide half a world away,” Biden said .
Biden said it would be up to lawyers to decide if Russia’s conduct met the international standard for genocide, as Ukrainian officials have claimed, but said “it sure seems that way to me.”
“More evidence is coming out literally of the horrible things that the Russians have done in Ukraine, and we’re only going to learn more and more about the devastation and let the lawyers decide internationally whether or not it qualifies,” he said.
Just last week Biden said he did not believe Russia’s actions amounted to genocide, just that they constituted “war crimes.”

Who was Dejo Tunfulu and what was his cause of death? Yoruba Comic Actor,...

Who Is Darealperkio On Instagram? Perkio Lil Durk Tiktok, Where Is He From?