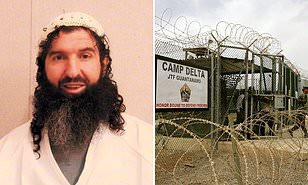 An Algerian man, Sufyian Barhoumi aged 48, has been repatriated from the UD to Algeria after staying in the infamous Guantanamo bay prison for almost 20 years without being tried in court.

He was captured at a safehouse in Pakistan with a top al-Qaeda member in 2002, and accused by the US of taking part in a plan to bomb the US.

But after 19 years in detention, the US Department of Defense said his detention was no longer considered necessary.

The US also said Algeria had given assurances that he would be treated humanely.

In a statement, the department added that US authorities recommended that  Barhoumi could be sent back to his country “subject to security… assurance”by the Algerian government.

“The United States appreciates the willingness of Algeria, and other partners to support ongoing US efforts toward a deliberate and thorough process focused on responsibly reducing the detainee population and ultimately closing of the Guantanamo Bay facility,” the statement said.

With the latest release, 37 detainees remain in the detention facility including 18 eligible for transfer, which is part of a US naval base complex in south-eastern Cuba.

Since 2002, the detention facility has been gsed to keep terrorists and ‘unlawful’ combatants.