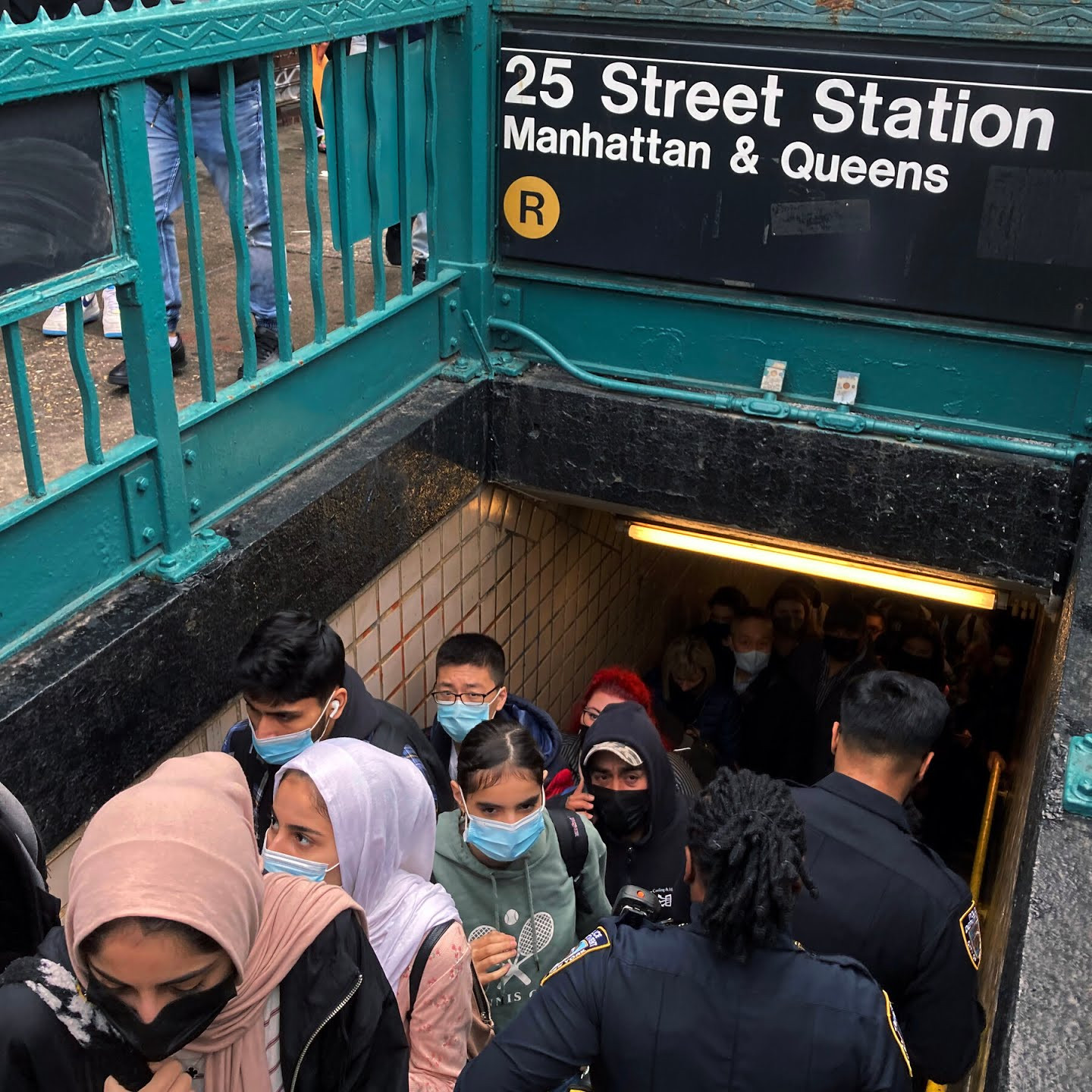 At least 16 people were injured, 10 out of them by gunfire, in a Brooklyn subway station, New York on Tuesday April 12 during the morning rush, after a man released a canister of smoke and opened fire on an N train and fled.
The D and N trains are popular lines, as they make express stops into Midtown Manhattan in New York. 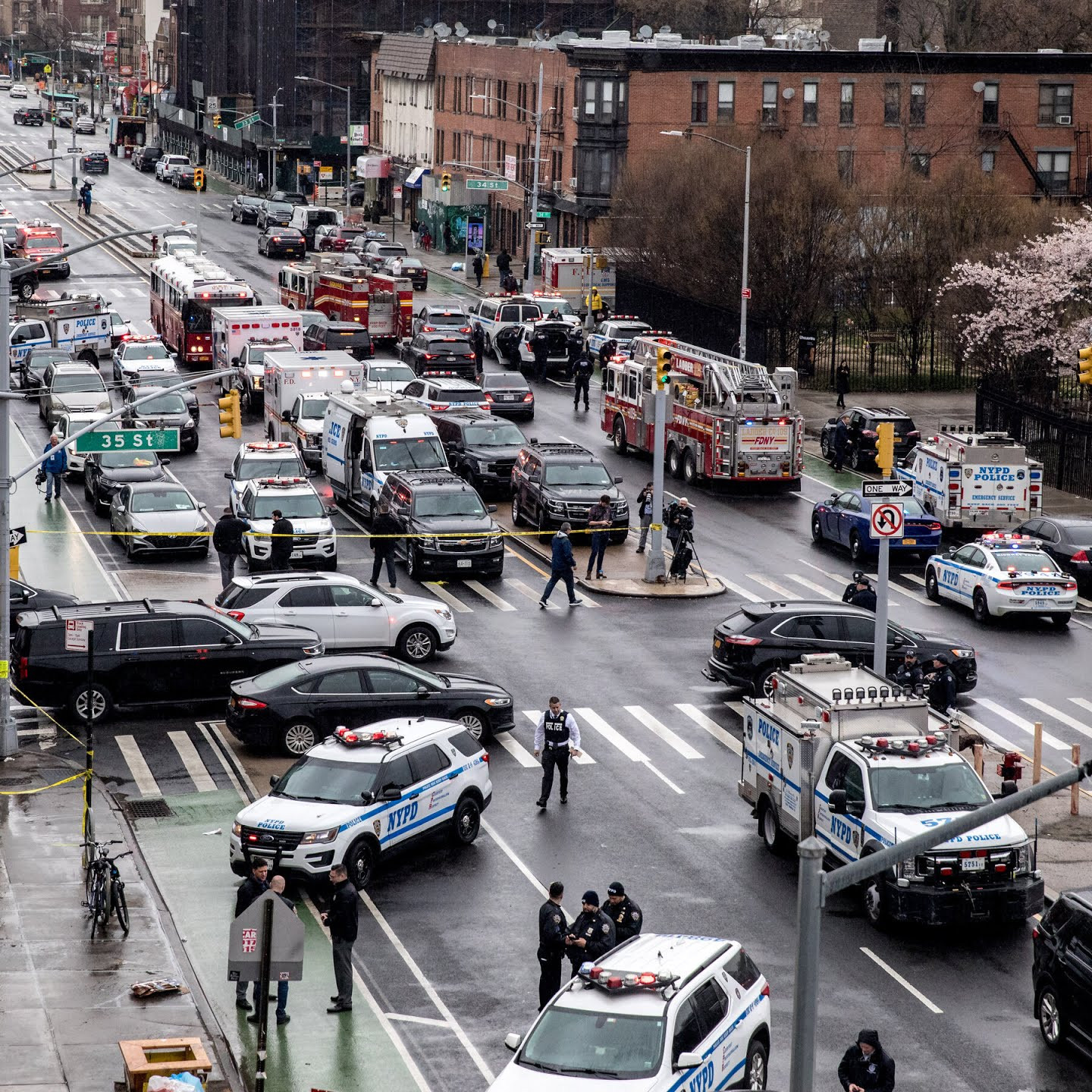 Police say the shooting set off panic and chaos aboard the train.
“This individual is still on the loose, this person is dangerous,” New York Gov. Kathy Hochul said during a news conference.
Police were looking for a man believed to be about 5-foot-5 and 180 pounds who was wearing a green construction vest during the attack, officials said.
The chaos, which was caught on camera , started at about 8:24 a.m. when shots rang out inside a Manhattan-bound N train as it was pulling into the 36th Street Station, NYPD Commissioner Keechant Sewell told reporters on Tuesday.
“The suspect was in the train car, the shooting began in the train car,” she said. “As the train was pulling into the station, the subject put on a gas mask. He then opened a canister that was in his bag and then the car began to fill with smoke. After that he began shooting.”
Police say none of the wounded have life-threatening injuries, and the attacks isnt considered an act of terrorism.
Mayor Eric Adams speaking to reporters said he considered this attack an act intended to bring terror to subway riders.
“Anytime you have a person that uses a smoke device, you have a person who discharges a weapon in the system, that appeared to place a gas mask on his face, that is a person that is intentionally trying to terrorize our system,” Adams told MSNBC.
Adams, a former police officer elected to office by voters with an increased fear of crime, said he’d significantly boost NYPD presence on the rails.
“What we’re going to do to help … (to) ease some of the apprehension, we’re going to double our enforcement,” he said. “We’re keeping our day tour police officers to compliment the the 4-to-12 tour police officers.”
Police say they’ve recovered the suspect’s gun and his bag, which included more unused smoke canisters and fireworks, law enforcement sources told NBC New York.
Police say the gun used got jammed during the attack, which limited the injuries from the rampage.
Passengers, including some of the wounded, stumbled out of the train with a few of them boarding an R train across the platform to get away, as the attack happened, witnesses and law enforcement sources told NBC New York.
In addition to the 10 shot, at least six others were hurt in the frantic rush to get away from the N train, the FDNY said.
Officers swarmed the area in search of security-camera footage that might show the suspect but a surveillance camera in the station is broken, which has reduced the time to capture the suspect.
Former NYPD Commissioner Dermot Shea urged the public not to jump to conclusions based on initial reports.
“It’s important to know, at a scene such as this, it can be chaotic. You can have all sorts of information coming in and trained investigators then have to sift through that to determine what is reality versus what is what somebody perceived in a split second,” Shea told MSNBC.

Tim Saunders Cause of Death? Cornish Poet and Journalist Passed Away, Obituary « CmaTrends