La Liga giants Barcelona started off preparation for the new season with a 3-1 win against lower division side Gimnastic in a preseason encounter played on Saturday, September 12th.

Barcelona opened the scoring as early as the sixth minute through Ousmane Dembele.

Antoine Griezmann converted a penalty to put Barcelona two goals up in the 17th minute.

In the 31st minute, Javi Bonilla pulled one back for Gimnastic to reduce Barcelona’s lead at the halftime break.

New manager Ronald Koeman made 11 changes at the start of the second half. 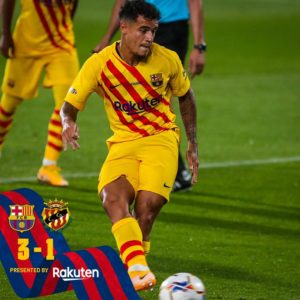 Philippe Coutinho would convert a penalty in the 51st minute to score Barcelona’s third. as they held on for the win.

ALSO READ  9:00Am Updates : £105m-rated playmaker set to remain at Barca beyond this summer
Related Topics:
Up Next

“He Plays so Childishly!” Arsenal fans React after Their victory over Fulham